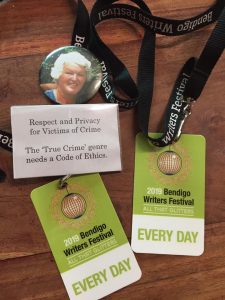 Sunday night – We sit here, my husband and I, after spending the last three days attending the Bendigo Writer’s Festival, after our successful appeal to the Bendigo City Council for the author’s removal from the program.
Ms Cuskelly was scheduled to appear in three panel sessions,
‘I Just Snapped’, ‘Regret’ and ‘What’s New in Crime’. In all three sessions it was blatantly obvious that Cuskelly’s subject matter would not have been relevant to the discussions which were presented.
One can only wonder why she was considered for inclusion in the program?
In particular, the third session, ‘What’s new in Crime’ focussed on the writing of ‘Crime Fiction’. Having spoken to the majority of the members of that panel afterwards, they were shocked to learn of the unscrupulous writing ethics of someone, with whom, they were to share the stage. They were amazed that a reputable publisher had not listened to my repeated pleas for the book not to be released, and ignored my assertions that the book contained misleading and incorrect information and that I was concerned for the emotional well being of my family. It was comforting to hear that all of the authors responding to my question from the floor, were all adamant that respect for victims and their families and their right to privacy was paramount.